tudaBirds Releases More Info on the Features with Updated Website

NUREMBERG, Germany, Jan. 21, 2022 (GLOBE NEWSWIRE) -- $tudaBirds has released a brand new version of their website highlighting numerous things about the project. With the new website, many questions about this ambitious NFT project have been answered, the most important of which are the services that the project plans to provide upon its release. 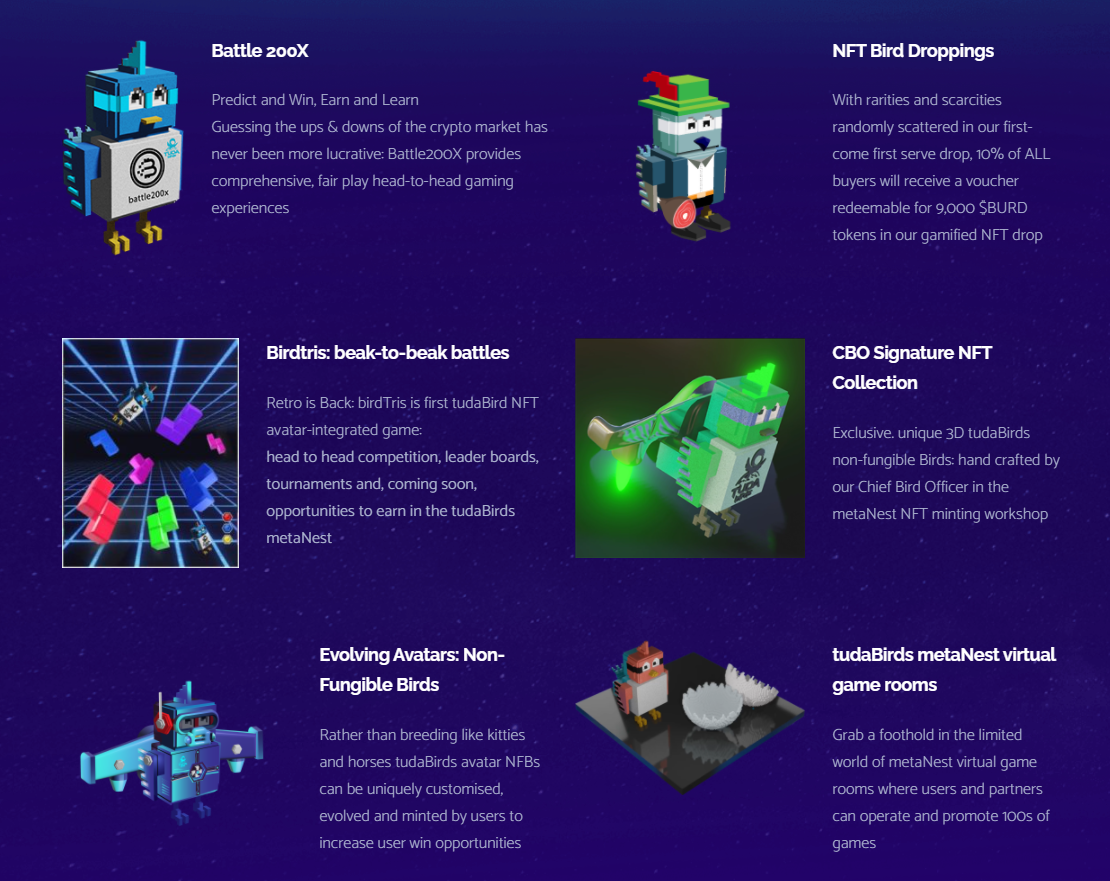 Mainly, the roster consists of games in the $BURD metaverse, its evolving avatar aspect, and the $BURD token itself.

The re-release of the website provides us with more information on every aspect of this project, which we will be discussing more in-depth below.

tudaBirds has promised plenty-a of services upon release, with many more to come across the entirety of 2022. Their release schedule and roadmap for 2021 were concluded successfully with no delays, so we anticipate that the new roadmap will be met without issues.

The services that $BURD promises are abundant, but there are five key takes from the entire roster, which are:

Below, we’ll glance over these five and explore what they seem to be about.

Battle200X. Played with $BURD, $BNB, and $SOL, Battle200X is a snapshot preview of the types of experiences our team is putting together.

In essence, it’s a wagering game where you can put your crypto up, and if your prediction is correct, you can get up to 20,000% returns on your initial investment.

It’s a crypto market/price prediction game akin to PancakeSwaps wagering game which was booming with popularity upon its release.

With rarities and scarcities randomly scattered in our first-come, first-serve drop, 10% of ALL buyers will receive a voucher redeemable for 9,000 $BURD tokens our gamified NFT drop. It’s an initial giveaway that will celebrate the launch of the entire project.

The initial NFT bird droppings seem to kickstart another feature planned for 2022, which is evolution NFTs.

Much like Battle 200x, Birdtis is a beak-to-beak action game inspired by the most popular game in the world, Tetris. It’s a reimagined, NFT, and blockchain-powered classic.

It will feature battles between avatars in the tudaBirds Metaverse, adequately named Metanest.

While P2E features are announced alongside leaderboards and competition, how the implementation of such mechanics will function is yet to be revealed.

The CBO NFT collection is an exlcusive NFT series of 3D tudaBirds, all handcrafted in the projects minting lab. The creator behind these 3D NFTs is the ‘Chief Bird Officier’, Ishan Rethnakaran, who was previously employed by Zynga, a leading game developer in the mobile gaming world.

Unlike most NFT and Metaverse projects out there that simply add new content into their roster, tudaBirds will have a unique evolution function that leaves the user with the ability to customize and evolve their own NFT, sort of like a game character in an MMO.

These changes will reflect on the NFT in technical, functional, and visual aspects. Evolving the NFT adds features, items, and much more.

tudaBirds is a next-generation NFT/Metaverse Gaming project based on the BSC and SOL blockchains. It aims to completely reimagine how NFT gaming works through innovating upon existing blockchain technology and making advancements on the digital ledger.

By combining top-shelf tokenomics and a team comprised of seasoned blockchain developers, $BURD strives to provide its investors with a sizable ROI as well as a unique way to interact with the future of finance and gaming alike.